Winston Churchill is quoted as saying, “We make a living by what we get, but we make a life by what we give.” No truer expression could describe two of MATTER’s longest-serving volunteers, Rod and Marge Jenkins. They built their lives around giving to others and giving back to their community. Faithfully volunteering with MATTER for nearly twenty years, Rod and Marge became a fixture here at MATTER. No, more than that. They became family. When Rod at 89 years old died last month after a fall, MATTER lost a member of our family and our hearts are broken.

Back in the early years, when MATTER was still Hope for the City, Rod and Marge began volunteering with us. Both retired, they would come in twice a week and happily do whatever tasks needed to be done. Whether they were cleaning bathrooms, sweeping floors or addressing gala invitations, Rod or Marge never complained. In fact, they usually thanked us for the opportunity to serve! Always sunny and upbeat, the Jenkins were a joy to work alongside.

Married for 70 years, it was obvious to even the most casual observer that theirs was a deep and affectionate bond. Marge was Rod’s North Star. He doted on her and was fiercely protective of her. They were a great team, raising three independent daughters, (“Rod’s Angels” as he called them), who blessed them with eight grandchildren and two great-grandchildren. Avid campers, they would usually spend their weekends with their children camping and helping to manage the campground where they were members for decades. 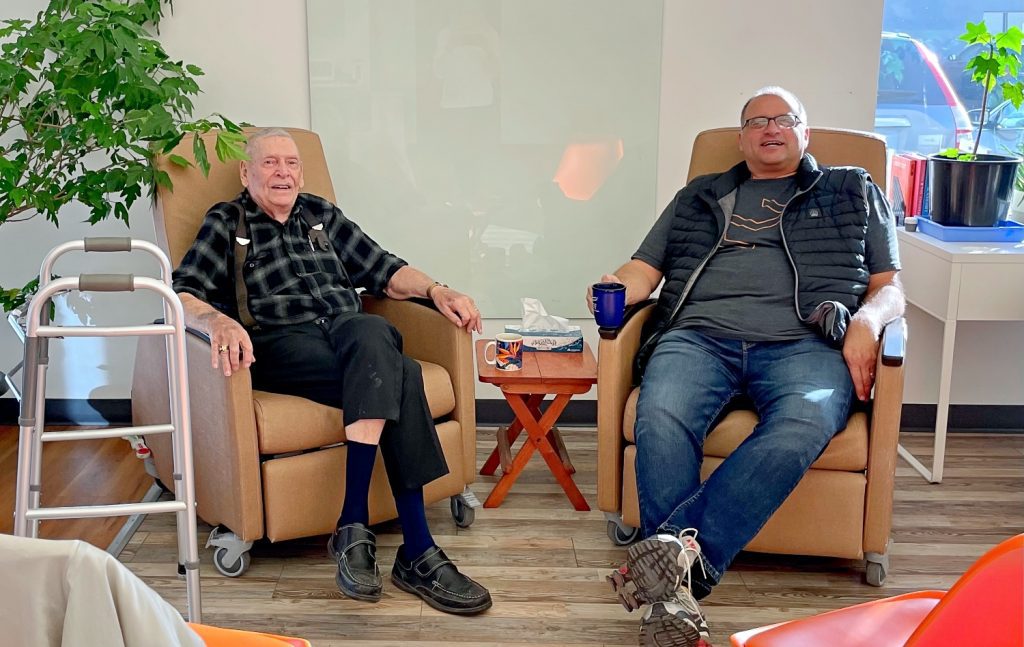 In 2019, Marge’s health began to decline. When it came time to transition her into a care facility, Rod was adrift. Without his North Star by his side, clouds of loneliness and depression began to roll in. Rod sought relief by coming to MATTER every morning. He’d come in early, spend an hour or two working on the day’s task and then sit in his special chair, sipping his coffee and visiting with team members. He often called these visits to MATTER his therapy saying, “If I didn’t have MATTER to come to every day, I don’t think I’d be here now.”

His daughters reflected on what MATTER meant to their dad, “Dad always said he wouldn’t have made it through the last two years with our mom’s issues if it wasn’t for us girls and his friends at MATTER. He didn’t even want to go on living if he couldn’t go to MATTER and work. The people there meant the world to him.”

The beautiful thing was that we needed Rod just as much as he needed us. With an increase in demand for our MATTERbox Volunteer Kits, we needed someone to assemble the supply bags that went into each kit. It was tedious work, but Rod persevered and over the course of the last year, assembled around 3000 supply bags! With the pandemic increasing the needs in our communities, Rod’s efforts made a huge impact on MATTER’s ability to meet the demands of our community partners for healthy food.

Of course, Rod didn’t want any accolades or special attention for his efforts. To him, he was merely doing what he had done his whole life—give of himself to help others. And that’s exactly what he did right up until the day he fell.

Rod and Marge’s life testifies to the fact that everyone can make a difference in this world if they choose. By finding their purpose in serving others, Rod and Marge created a rich and diverse life for themselves and their family, and in the process made the world a better place for so many others. Speaking for the team at MATTER, President Quenton Marty shared his thoughts,

“Rod and Marge were a tremendous help to MATTER’s ability to support our partners, something for which we’re extremely grateful. But even more than that, we’re grateful for the decades of friendship and the example they set for us. Their commitment to serving others throughout their lives and their willingness to stay at it far longer than most people even desire to, was an inspiration. Their lives exemplified MATTER’s values and they will be deeply missed.”

If you’re looking to enrich your life and the lives of others through volunteering, please contact us. We have plenty of opportunities available. And like the Jenkins, you may just find that in the process of giving to others, you receive some of life’s greatest blessings in return.