Robert Allen III of MAD DADS describes the people he meets on the streets of Minneapolis; people without the basics in life – food, shelter, a place to belong, a sense of worth.

“A lot of times, they feel as if the world has turned its back on them, so something as small as giving them food to eat means the world to them.”

For the last eight or nine months Robert has been hitting the streets after dark, reaching out to these lost souls to provide them the resources they need to survive. We’re honored that his mission now includes MATTERbox snack packs. 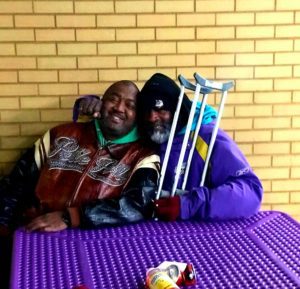 Robert, left, with a friend from the streets of Minneapolis.

Robert is a social outreach worker with an organization called MAD DADS, an acronym that stands for Men Against Destruction, Defending Against Drugs and Social Disorder. MAD DADS was founded 20 years ago by African-American men and parents determined to take back their communities from the destruction caused by gang violence and illegal drug use. According to their website, the organization’s activities are designed to promote and demonstrate positive images of fathers engaging and protecting community, youth and families.

When Robert started going out into the streets, he used his own money to purchase the food for his nightly distribution. With his limited budget, Robert would be the first to admit the food wasn’t very healthy. Now that he’s teaming up with MATTER, Robert is able to provide a nutritious alternative to the empty calorie junk food that for some is their only meal of the day.

Equally rewarding is watching MATTERbox snack pack recipients read the handwritten You MATTER notes of encouragement tucked into each snack pack. That human connection, even on paper, means the world to those receiving the snack packs.

“I have a young lady who saves every single note she receives. She keeps them in a side pocket of her backpack…I think the people love the notes just as much as the food that’s being provided.”

Today on Give to the Max Day, would you consider giving to MATTER so we can help Robert and our many other caring partners help those in need in our communities? Over the last three years, MATTER has impacted over 11 million people in Minnesota and around the world live healthier lives and experience that human connection that lets them know they matter.

People like Miss Sally, an elderly lady Robert met on the streets who has become his friend. With no coat, she wraps herself in a few old bed sheets, a thin protection against the cold. Worn sandals barely cover her feet. During one of his recent outreaches, Miss Sally came up to him and began rummaging through the few possessions in her bag before handing him a small scented candle. Surprised, Robert asked the reason for the unexpected gift. Her answer was simple. “Because you’re always giving me things.”

“I teared up right on the spot. This woman who has nothing thinks enough of me to share what little she has in the world with me. The MATTERbox snack packs mean so much to these people and I thank you for allowing me the privilege of giving them to the people who need them.”

Everyone deserves a chance at a healthier life; a life with nutritious food that fuels the body, and human connections that nourish the spirit with a sense of dignity and self worth. “These people need to know that they are still loved, that they still matter, that someone still cares about them.”

On this Give to the Max Day, let people know they matter. #GTMD18 kicks off our goal of raising $50,000 by the end of 2018 to impact 50,000 more lives. Join #MATTERnation and help us increase access to health at home and around the world. Every $1 donated to MATTER sends a message of hope and health to someone who needs it most. Will you help us today?