Victoria Falls Hospital’s Nutrition Garden: Giving Thanks for the Harvest!

Previous Next
Victoria Falls Hospital’s Nutrition Garden: Giving Thanks for the Harvest!

Here in the Midwest the growing season is definitely over. The fields have been harvested and are now sitting barren and brown, waiting for the cover of snow to blanket them until spring. But it’s another story entirely in Zimbabwe. With temperatures in the 90’s and humidity at 90%, their growing season is in full swing.

There’s no better proof of this than on the grounds of the Victoria Falls Hospital. Adjacent to the back parking lot is the hospital’s nutrition garden. When it was established by MATTER in 2018, in collaboration with Angel of Hope Foundation, Love for Africa, Rotary International and Pique Travel Design, it was hard to believe that the neglected, overgrown strip of land would become the lush, productive garden it is today.

The soil in Victoria Falls is notoriously sandy, making it difficult to grow nutritious food. The first step in building the garden was to create worm beds and fill them with thousands of Red Wigglers. By eating the compost in their beds, the worms create the rich, black, fertile soil the garden needs. (You can read more about this ingenious process here.) While waiting for the worms to make enough soil to use, other organic fertilizers were brought in, (including elephant dung!), to get the garden up and running. By March of this year, the garden had started to yield its produce. 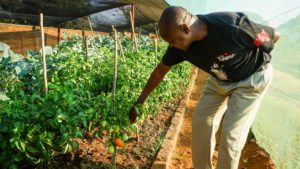 Originally slated to feed mainly the expectant and new moms, the garden has been so productive it’s now able to feed all the patients. Under the attentive care of the garden’s manager, Silent Kaseke, the garden has thus far yielded enough vegetables for over 4,300 meals for the hospital!

Supplying patients with a variety of nutrient-dense food is important, especially when a main staple in the Zimbabwean diet is “sadza”. Though popular, this thickened white maize meal porridge has very little nutritional value. According to Dr. Fungai, Regional Health Doctor for Victoria Falls and surrounding areas, malnourishment is a major concern.

“People are deficient in the micronutrients that vegetables provide. Our diet here is very starchy so a lot of people eat their sadza and think they’re filled. But there’s a silent hunger going on. They’re not eating the correct nutrition that their bodies need. And with our current drought, we’re starting to see an increase in the cases of severe malnutrition, including low birth weight among newborns. We’re predicting it will get worse.” 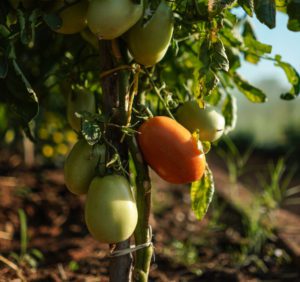 Gardens like this one at Victoria Falls Hospital are addressing this troubling issue. As the harvest of kale, spinach, tomatoes, green peppers, okra, beets, carrots, green peppers and cabbage increases, so does the health of the patients at the hospital. That’s why MATTER is working hard with our partners on the ground to establish more hospital and community gardens around the country.

During this week of Thanksgiving, we here at MATTER want to express our gratitude to everyone who is helping us help the people of Zimbabwe. The nutrition gardens, hospital renovations, and the MATTER Innovation Hub would not be possible without your generous support. You truly matter! And together, we’re letting the people of Zimbabwe know that they matter, too.

Your continued support is essential to keep these exciting initiatives moving forward so more people will know they matter. Learn more here!